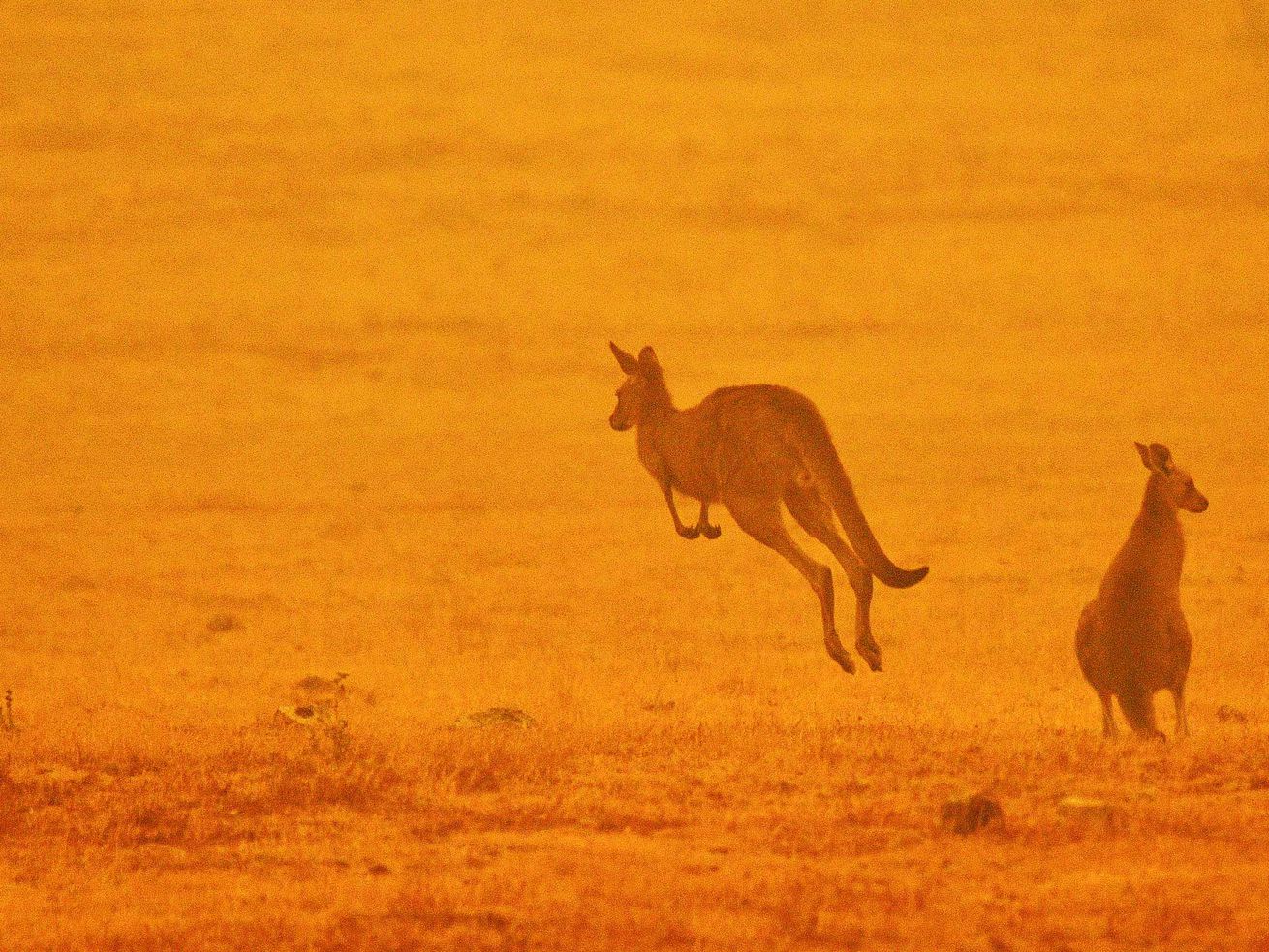 A kangaroo jumps in a field amid smoke from a bushfire in Snowy Valley on the outskirts of Cooma, Australia, on January 4, 2020. | Saeed Khan/AFP via Getty Images

Half a billion kangaroos, koalas, and others — killed? Here’s where the eye-popping estimate comes from.

As fires continue to rip through Australia, some devastating numbers are emerging: At least 24 people killed. More than 15.6 million acres torched. Over 1,400 homes destroyed. And, according to one biodiversity expert’s count, an estimated 480 million animals killed.

That last number — nearly half a billion — is staggeringly huge, and has made the rounds on social media over the past few days. You might be wondering: How are so many animals dying? And how do we know the number of animals killed?

The bushfires, exacerbated by climate change, have since September swept through vast swathes of Australia — we’re talking about an area bigger than Vermont and New Hampshire combined — affecting a mix of rural and suburban areas.

Many wild animals and farm animals have been killed directly by the flames. We can see the evidence with our own eyes: Distressing images of burned kangaroos and koalas, and videos of dead animals on the sides of the roads, have circulated online over the past week.

Other animals have not been burned alive but have faced death due to the destruction of their natural environment, which they rely on for food and shelter.

As for the 480 million figure, that estimate comes from Chris Dickman, a biodiversity expert at the University of Sydney. A statement from that institution explains how he arrived at the number.

In 2007, Dickman co-authored a report for the World Wild Fund for Nature (WWF) on how land-clearing affects Australian wildlife in the state of New South Wales (NSW). To calculate the impact, he and the other authors first mined previously published studies for estimates of mammal population density in NSW. Then they multiplied the density estimates by the areas of vegetation approved to be cleared.

Using this simple formula, Dickman can now calculate that approximately 480 million animals have been killed since the bushfires in NSW started in September.

Some experts have suggested that estimate is too high.Sadly, there are two reasons to believe that the true loss of animal life is actually much greaterthan the estimate.

First, the 480 million number applies to NSW alone, and the bushfires have since spread to the state of Victoria. Second, the authors of the 2007 report “deliberately employed highly conservative estimates in making their calculations,” according to the statement.

It’s also worth noting that the 480 million estimate includes mammals, birds, and reptiles, but does not include insects, bats, or frogs.

At this point, you might be asking yourself: Can’t animals just run away from a raging fire? Can’t birds just fly away?

In many cases, particularly for birds, the answer is yes. “Certainly, large animals, like kangaroos or emus — many birds, of course — will be able to move away from the fire as it approaches,” Dickman told the BBC. But he added that “it’s the less mobile species and the smaller ones that depend on the forest itself that are really in the firing line.”

Koalas are a good example. An estimated 8,000 of them have died from the fires, ecologists say. That’s almost one-third of all koalas in NSW, which forms their main habitat.

Other animals may have fared better. Reptiles, for example.

“Although it is hard to find estimates of how well reptiles survive fires, in similar areas of Australia the majority of these reptiles live in the soil,” said Colin Beale, an ecologist from the University of York. “Soil is a very good thermal insulator and burrowing reptiles can certainly show very low mortality even during intense fires.”

Some ecologists, including Beale, say the 480 million estimate may be inflated. Although it’s plausible that many animals have been affected by the fires, the proportion of them that actually died may be smaller.

Let’s hope so. The truth is, it’s hard for anyone to know the precise impact of the fires at this stage, not least because many animals that survive the flames will likely die later due to lack of food, water, and shelter.

Regardless of the exact numbers, this is a crisis for biodiversity in Australia, which is home to some of Earth’s most distinctive animals, like marsupials. In fact, around 244 species of mammals are found only in Australia. What’s more, according to the University of Sydney’s statement, “Some 34 species and subspecies of native mammals have become extinct in Australia over the last 200 years, the highest rate of loss for any region in the world.”

The current loss of Australian animal life is a serious tragedy, by anyone’s count.It adds to the terrible human toll: two dozen people killed, and thousands more evacuated. Fires are expected to keep raging for another month.

To help with the evacuations and firefighting, the government announced this weekend that it’s deploying the military. Experts say the deployment is on a scale not seen since World War II. As Defense Minister Linda Reynolds put it, “It is the first time that reserves have been called out in this way in living memory.”

Sign up for the Future Perfect newsletter. Twice a week, you’ll get a roundup of ideas and solutions for tackling our biggest challenges: improving public health, decreasing human and animal suffering, easing catastrophic risks, and — to put it simply — getting better at doing good.